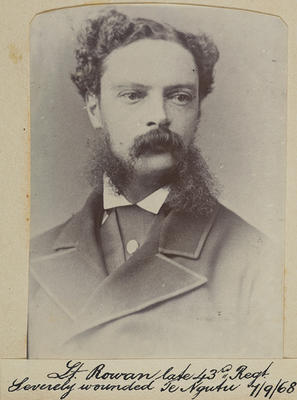 Production date
Circa 1900
Description
Copy photograph of a studio portrait of Lieutenant Frederic Charles Rowan, 43rd Regiment British Army and later Armed Constabulary. Rowan was wounded in the battle at Te Ngutu o te Manu, South Taranaki, on 7 September 1868. The photograph is a bust portrait and shows Rowan dressed in a jacket with tie. He has a beard and is looking away from the camera. The photograph is included on page 13 of William Francis Robert Gordon's album "Some "Soldiers of the Queen" who served in the Maori Wars and Other Notable Persons Connected Herewith".
See full details