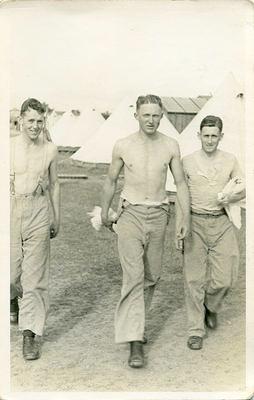 Production date
Circa 1942-Circa 1943
Description
Kenneth Charles [Ken] Morgan (left), Leslie John Cecil Medway [Jack; nickname 'Nuts'] Medway (centre) and Ray Cursons (right) walking in a military training camp, possibly Palmerston North, prior to being posted during WWII. Both Morgan and Medway are shirtless and are wearing trousers with suspenders. Medway's suspenders are hanging off his trousers. Medway is holding an object in one hand. Cursons is also wearing trousers and a shirt. He has an object tucked under his arm. All three men are looking directly at the camera. Military buildings and bell tents are visible in the background. Morgan and Medway were best friends from New Plymouth. In 1943 Medway was posted to Italy with the 22 Infantry Battalion. He was killed in action on 30 July 1944. Five days before he died he wrote a letter to Morgan, which was found amongst his possessions after he died and was returned to his family. The letter was forwarded to Morgan in 2004 by Brian Medway, Jack Medway's brother, 60 years after it was originally written (see ARC2011-265).
See full details