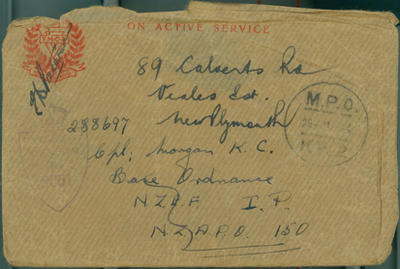 Production date
25 Jul 1944
Description
A six page letter written by Lesley John Cecil Medway (known as Jack, nickname 'Nuts') to his best mate Ken Morgan while serving in the 22nd Motor Battalion in Italy during World War II. Medway discusses aspects of war life such as censorship of mail, antics of the soldiers, those soldiers who they both knew from Taranaki, death of soldiers, an incident involving a mine explosion and anticipation of the end of the war. The letter has been censored in several places with words having been cut from the paper.
Five days after penning the letter Medway was killed in combat alongside his friend and ‘bivvy’ roommate 'Fudge' Valintine, also from Taranaki. An Officer recalls in J. Henderson’s '22 Battalion' the assault in Romolo:
"I was told [in an order from Divisional Headquarters] to send an N.C.O. and two men… to the village of La Romola. They were to go to the village, find out if it was occupied, count how many Germans were there and radio the information back, then return and rejoin the platoon in time to move off by midnight. Apparently Div HQ had the word of two Italians that the Germans were pulling out and the authorities did not wish to waste the ammunition involved in a barrage. If the Hun was pulling out, the barrage could be called off… I selected Corporal Edwards… To go with him I picked what I thought to be two of the most enterprising and reliable men—‘Fudge’ Valintine and ‘Nuts’ or Jack Medway. These two were friends and were as keen and fine a couple of chaps as I knew… Just before we moved off at midnight word came to me that Eddie Edwards had crawled in on hands and knees, with his feet badly smashed and his scalp badly wounded, and the information that Fudge and Nuts were dead. A shell had got them not 200 yards down the hill. Three days before that, Nuts, in a moment of conversation, had told me how lucky he had always been in having such a wonderful mother and family at home, and how he thought that if a man had to finish up his life this way he reckoned it would be worth it for a family like his. He may have known something—I don't know. I didn't tell the boys as we moved off what had happened."
In 2004 Ken Morgan met up with Jack Medway’s brother, Brian Medway. Brian promised to send Morgan some photos the Medway family had received from the war office when Jack’s possessions were returned home. Amongst the photos Brian found the letter written by Jack in Cassino. It was sent on to the original intended recipient – 60 years overdue.
Also included is the original envelope containing the letter and a three page letter from Brian Medway to Ken Morgan explaining the circumstances of finding the letter.
See full details

hi please disregard my earlier comment and DO NOT POST i have mistakenly posted about another event against this reference.