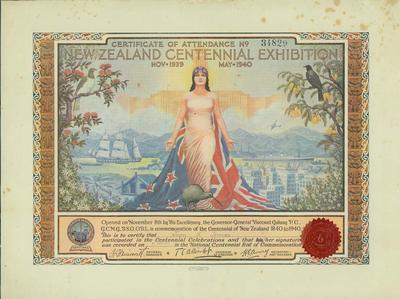 Production date
06 Apr 1940
Description
The New Zealand Centennial Exhibition took place over six months from Wednesday 8 November 1939 until 4 May 1940. It celebrated one hundred years since the signing of the Treaty of Waitangi in 1840 and the subsequent mass European settlement of New Zealand.
This is a certificate of attendance issued as proof that the recipient, in this case Joan N Jenner (later Tylee), had attended the Centennial Exhibition. Jenner attended the exhibition as part of a school group from Taumaranui District High School. The artwork on the certificate by Leonard Mitchell shows a female figure, Zealandia (a version of Britannia), partially draped in the New Zealand flag, before a montage of New Zealand scenes depicting a clear before-and-after glimpse of progress.
See full details

Exhibitions and displays Entertainment and recreation