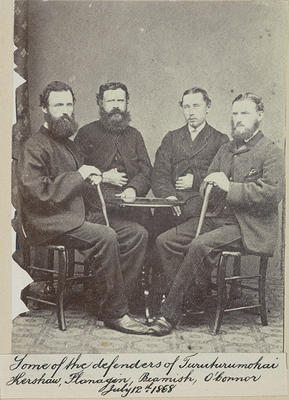 "Some of the defenders of Turuturumokai, Kershaw, Flanagan, Beamish, O'Connor, July 12th 1868"

Production date
Circa 1900
Description
Copy photograph of a studio portrait of four soldiers involved in the battle at Turuturu Mōkai redoubt, near Hāwera, Taranaki, on 12 July 1868. Pictured left to right, seated around a small table, are: Constable Kershaw, Constable Flanagan, Constable Beamish and Constable O'Connor. The men are wearing suits. All four were wounded during the battle. The photograph is included on page 7 of William Francis Robert Gordon's album "Some "Soldiers of the Queen" who served in the Maori Wars and Other Notable Persons Connected Herewith".
See full details

"Some of the defenders of Turuturumokai, Kershaw, Flanagan, Beamish, O'Connor, July 12th 1868"