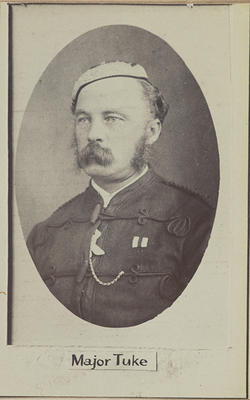 Production date
Circa 1900
Description
Copy photograph of a studio portrait of Major Tuke. The photograph is a bust portrait of Tuke. He is wearing military uniform, including a cap, and has a moustache. The photograph is included on page 6 of William Francis Robert Gordon's album "Some "Soldiers of the Queen" who served in the Maori Wars and Other Notable Persons Connected Herewith".
See full details