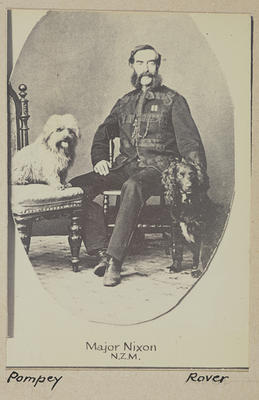 Production date
Circa 1900
Description
Copy photograph of a studio portrait of Major Nixon of the New Zealand Militia. Nixon is pictured with his two dogs, Pompey and Rover. Nixon is seated between the two dogs and is wearing military uniform. Pompey is seated on a chair next to Nixon. Rover is sitting on the floor. The photograph is included on page 5 of William Francis Robert Gordon's album "Some "Soldiers of the Queen" who served in the Maori Wars and Other Notable Persons Connected Herewith".
See full details