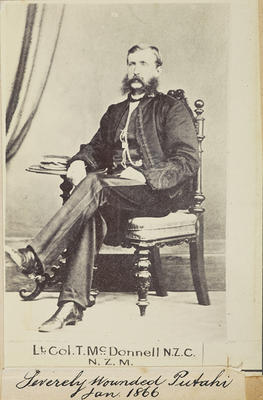 Production date
Circa 1900
Description
Copy photograph of a studio portrait of Lieutenant Colonel Thomas McDonnell, winner of the New Zealand Cross. McDonnell is seated and is wearing a suit. One arm rests on a small table that holds his military cap. McDonnell was wounded at Te Putahi pa in January 1866. The photograph is included on page 2 of William Francis Robert Gordon's album "Some "Soldiers of the Queen" who served in the Maori Wars and Other Notable Persons Connected Herewith".
See full details