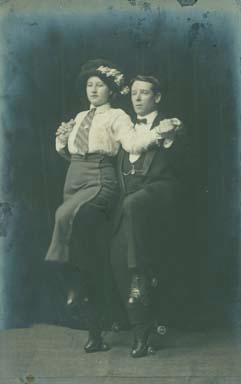 Production date
Circa 1902-1929
Description
William Lints was born in 1881, in Aberdeen, Scotland. When he was two years old he immigrated, with his parents, to Australia where he was educated. Lints came to New Zealand in 1895 and settled in Whanganui, where he learned his trade as a hairdresser. He moved to New Plymouth and managed the Central Hairdressing Saloon before establishing the Antiseptic Hairdressing Saloon on Devon Street East in 1906.

Lints married a daughter of the late Mr. W. Armstrong, of Whanganui, in the year 1900, and had three sons. He died in Whanganui in 1973.

This collection consists of a number of photographs relating to Lints and an album of newspaper clippings and photographs.
See full details