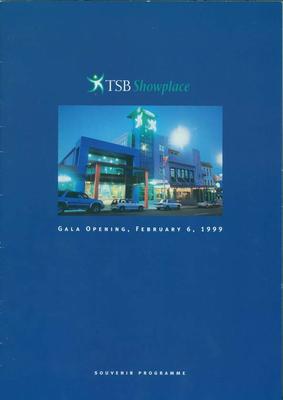 Production date
06 Feb 1999
Description
Official programme for the opening of the refurbished TSB Showplace, New Plymouth 6 February 1999.
In 1997 the New Plymouth Opera House Trust, wo were struggling to sustain the venue as well as produce high quality shows, handed management of the theatre to the New Plymouth District Council (NPDC). With support from the NPDC and TSB Bank a refurbished and expanded theatre complex re-opened on 6 February 1999 with the addition of a new smaller black box theatre known as the Theatre Royal and function room (The Alexandra Room).
Now the TSB Showplace is a category A heritage building which continues to host numerous events from theatrical productions to weddings, conferences and expo’s and has become an iconic landmark within the Taranaki district known both locally and internationally.
See full details