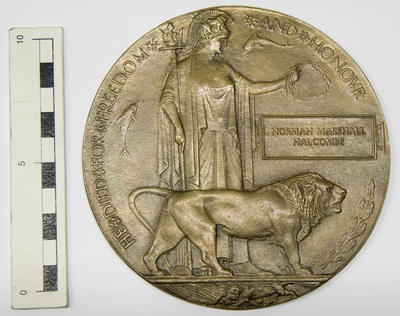 Description
A bronze Memorial Plaque showing a robed and helmeted Britannia standing behind a lion. Britannia is holding a trident in one hand and a wreath in the other. Two dolphins are also pictured on the plaque and a small scene of a lion pouncing on an eagle features near the bottom. " HE DIED FOR FREEDOM AND HONOUR " is marked around the edge of this scene. " NORMAN MARSHALL / HALCOMBE " is also marked in a rectangular frame on the plaque. " ECRP" is marked in small letters near the lion's front paw. The plaque is enclosed in a folding cardboard enclosure.
See full details

Credit line
"Norman Halcombe headed to America to train at Stanford University as a civil engineer. By the time World War I broke out, he had established a lucrative practice in San Francisco, and paid his way to England to sign up with the Royal Engineers. While in London he met up with his cousin, fellow Taranaki expat Blanche Turton, and they were married in 1918. But their wedded bliss was cut cruelly short. The following day Norman shipped out for India, and Blanche was soon informed her husband had been hospitalised with influenza. He died a few days later. "For more information on the story of Norman Halcombe see the section Natural Obsessions: The Blanche Halcombe Collection in the book Flashback: Tales and Treasures of Taranaki pp.220-225. http://www.pukeariki.com/Heritage/Flashback.aspx

More than 1 million of these plaques were issued to commemorate men and women who died on 'active service' between 4 August 1914 and 10 January 1920.