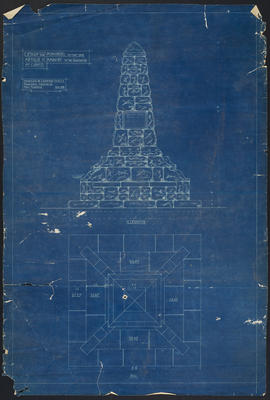 Production date
Aug 1918
Description
Architectural blueprint for Ambury Memorial, erected beside the summit of Mt. Taranaki near Razorback Track at North Egmont.
On 3 June 1918 Arthur Hamilton Ambury, an experienced mountain climber, died near the summit of Mt. Taranaki while trying to rescue a group of stranded climbers. The gallantry of this attempt to save lives against almost impossible odds and the respect for Ambury as citizen and devoted Egmont climber brought a depth of feeling that has few parallels in Taranaki, especially as Ambury was the father of four young children. In October 1919 the Governor-General, Lord Liverpool, at a public reception in New Plymouth, presented Mrs Ambury with the Albert Medal with the words, “His Majesty the King has commanded me to hand to Mrs Ambury the Albert Medal gained by her late husband for very gallant conduct.” On Good Friday that year, 1919, the Mayor of New Plymouth unveiled the memorial, designed by architectural firm Messenger and Griffiths, at North Egmont. There are also a set of bluffs on the North side of Mt Taranaki which bear his name: ‘Ambury Bluff’ west of Humphries Castle.
See full details