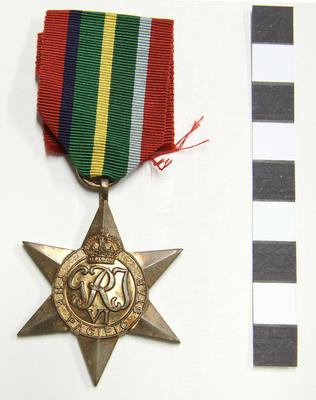 Description
A bronze Pacific Star. The six pointed star features the " GRI / VI " monogram at the centre which is surmounted by the royal crown. " The Pacific Star " rings the monogram. The centre of the ribbon is dark green with a central yellow stripe. On the outer edges are wide stripes of red with narrow stripes of dark blue and light blue between the stripes of dark green and red.
See full details

Credit line
This Pacific Star was awarded to Sergeant Ronald Reardon, of Tariki. Reardon was a Kittyhawk pilot in the 18th Squadron of the RNZAF who served in the Pacific Theatre during World War II.
He fought as part of Operation Cartwheel (1943–1944) a major military strategy of the Allied forces (United States, Australia, New Zealand, the Netherlands, and some Pacific Islands), which targeted the Japanese base at Rabaul, Papua New Guinea. As Kittyhawks could not operate at great heights, they acted as escorts providing close cover for the American bombers during the bombing strikes against Rabaul. The strength of the Kittyhawks came as a result of discipline and teamwork. Reardon left New Zealand for Papua New Guinea on the 9th January 1943. His Kittyhawk was shot down one month later off the coast of Kabanga, southwest of Rabaul.