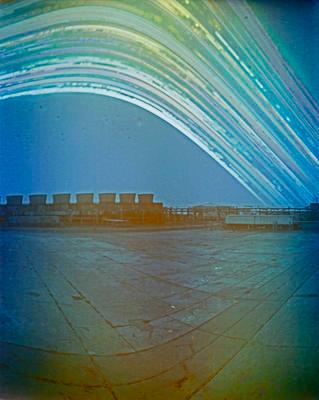 Production date
2010
Description
Solargraph of the cooling towers at Methanex New Zealand's Motunui production plant. The cooling towers are visible in the middleground. The solargraph has captured a rainbow-like curve of rays, which were generated by the sun's movement across the sky over a period of three months. Lines on the concrete in the foreground create an unexpected mirroring of the sun’s path through the sky.

Solargraphs are images that track the sun’s movement. They are created with a pinhole camera and developed with the help of a computer. A light-proof container with a small hole for light to travel through is used as a simple camera, which is pointed at the sun. Black and white photo paper is exposed inside the camera for a length of time – anything between one day and six months. As the days pass, the sun’s movement is recorded as vivid arcs of light on the negative. When the negative is scanned in colour and turned into a positive image on the computer, a rich array of unexpected hues are revealed.
See full details