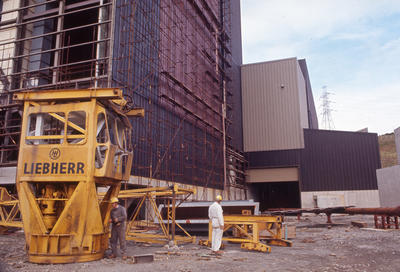 Production date
08 Aug 1974
Description
View of the west end of the boiler house, New Plymouth Power Station construction site, Port Taranaki, New Plymouth. The tower crane cab is resting on the ground on the left of the image. The crane was dismantled after the boiler house construction had neared completion. Two men are pictured in the foreground. The first unit of the New Plymouth Power Station was commissioned in February 1974. The power station used natural gas and heavy fuel oil as its primary fuel. Plant operation decreased from 1999 and the station was decommissioned by Contact Energy in 2008.
See full details