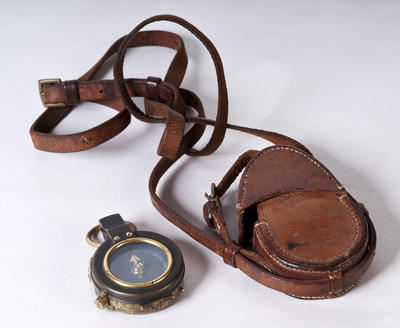 Production date
Circa 1917
Description
A Verner's pattern Mark VIII prismatic compass and pear shaped leather case. " VERNER'S PATTERN VIII " is marked around the egde of the face. " B-L / No. 69872 / 1917 " is marked on the underside along with a broad arrow. " EL Malone 1st WIB Division " is etched faintly on the case.
See full details

Credit line
This compass, a standard issue model for officers, originally belonged to Lieutenant Edmond Leo Malone, a Taranaki soldier who served in World War I. Malone died in France after being wounded during heavy fighting in March 1918. It was lost for ninety-two years before being rediscovered in 2009 when it was found among a box lot of militaria purchased by English fine art dealers David and Judith Cohen. Noticing that "EL Malone 1st WIB Division"was etched faintly on the case, they showed it to their friend Dr Christopher Pugsley, a New Zealand military historian who had written about and researched the Malones extensively. Pugsley immediately saw its significance, and having
been gifted the compass notified Edmond’s granddaughter, Dr Judy Malone, who arranged
for its donation to Puke Ariki. ‘The chance of this happening is so small it is amazing. It’s a real bit
of Taranaki history and it belongs to the people of Taranaki,’ she said. For more information see Lieutenant Edmond Leo Malone: 'A Splendid Example of Courage and Energy' in Moffat, A. Flashback: Tales and Treasures of Taranaki. Wellington, Huia, 2012, pp.86-89. http://www.huia.co.nz/shop&item_id=3428