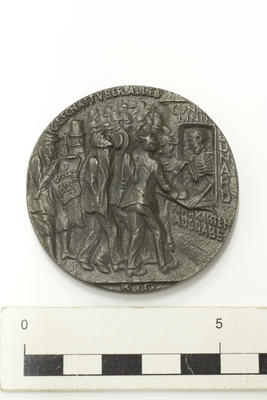 Production date
1915
Description
A cast iron English propaganda version of the German Lusitania Medal. The obverse depicts the Lusitania sinking stern first with guns and planes on her decks. " KEINE BANN WARE! " ( NO CONTRABAND GOODS) is embossed above this scene. 'DER GROSS-DAMPFER/ =LUSITANIA= / DURCH EIN DEUTSCHES / TAUCHBOOT VERSENKT / 5.MAI 1915 / " (The liner Lusitania sunk by a German submarine 5 May 1915 ) is written below the scene. The reverse depicts a skeleton representing death behind the ticket office of the Cunard Line handing out tickets to a crowd of passengers. One of the passengers is reading a newspaper with the headline " U BOOT GEFAHR " (U BOAT DANGER) on it. " GESCHÄFT ÜBER ALLES " (BUSINESS ABOVE ALL) is written near the upper edge.
" CUN / LINIE " is written above the ticket window. " CUNARD " is written vertically beside the window. " FAHRKARTEN / AUSGABE " (TICKET OFFICE) is written below the window. " KG " is written near the bottom of the medal.
See full details

Credit line
This medal is a reproduction, made by the British Government during World War I, of the Lusitania Medal. The original iron medal was made by German medallist Karl Goetz, and marked the sinking of the English passenger and cargo liner Lusitania on 7 May 1917. The intention of the original designer was to condemn the British and the Cunard Line for endangering the lives of civilians in order to make a profit. However the medal, and the incorrect date printed on it, was seized on by British authorities who produced 300,000 copies of it as part of an effective counter propaganda campaign to highlight German "frightfulness". It was gifted to Taranaki Museum as part of a large collection made by the prominent south Taranaki lawyer John Houston.