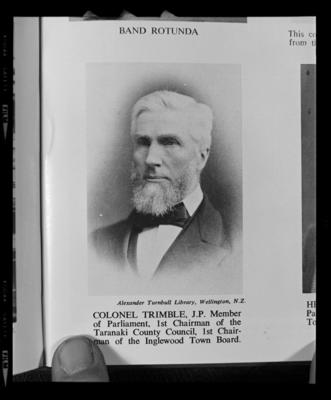 The Turnbull's reference is 1/2-022068-G. Photograph of Robert Trimble (1824-1899), taken circa 1870s by an unidentified photographer. Their biography of him reads: "Born in Belfast; worked in the United States, where became an abolitionist, and on his return to UK, formed the Manchester Emancipation Society to support the cause of the Union during the American Civil War. As a Volunteer became Colonel of the 15th Lancashire Regiment. Emigrated to New Zealand 1875, and settled at Inglewood, where he set up a sawmill. Served in local body politics and was Member of Parliament for Taranaki 1879-1887. Also served as a judge on the Maori Land Court. Was considered to radical liberal in politics."
See full details