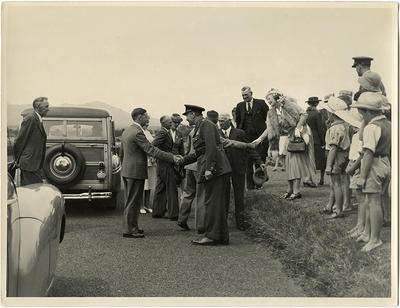 Production date
08 Dec 1947
Description
Three photographs of Governer General Bernard Cyril Freyberg surrounded by a crowd during his visit to New Plymouth in 1947.
The photos show Lord and Lady Freyberg being introduced to people by Mayor Everard Gilmour, on Churchill Heights. The Vice Regal visit was reported the next day in the Taranaki Daily News on 9 December 1947.

The third photo taken on top of Churchill Heights, New Plymouth, Dec. 1947:- On the left side of the photo, the man with his hand to his face is Westown School headmaster, Jack Leach. The boy with a band aid on his right knee is Barry Darney, partly hiding Janet Davie wearing a white dress. The two Freybergs have their left arms raised, acknowledging the group of patients and staff who are waving to the Freybergs from the grounds of the New Plymouth Hospital. Between the Freybergs,the bald man is Mr M J Smith,a Westown School teacher, standing behind school boy Forbes Warne. The three girls standing level with Lord Freyberg”s hip,are, Elizabeth Barrett whose right arm is partly hiding Shirley Strombom, Elizabeth”s left arm is hiding most of Fay Naylor. Three boys at the right side of the photo,have Ian Lobb,wearing hat and sandals, half hidden by the other two.

The second photo shows the Freybergs mixing among those gathered on top of Churchill Heights, Dec.1947. An extract from Taranaki Daily News the next day reads “the Governor General,speaking at a civic reception in New Plymouth, said the Royal Family took a very keen interest in the children of the Empire, who were its future heirs, and had specially requested that he and Lady Freyberg see as much of the children of New Zealand as possible.” A few people identified in this photo: next to the station wagon is Mayor Gilmour talking to Mrs Janet Davie. Three children wearing sun hats- Jim Barrett standing behind Peter Strombom who is standing behind Ian Lobb. Taller boy wearing a cloth hat is Barry Darney standing next to a lady. Governor General, wearing a cap,is talking to some children. Next to the lady , in dark clothing, the taller boy is Rob Calder with his right elbow bent out covering the face of Elizabeth Barrett. The group at the right side of the photo features Don Calder, with his right leg bent, and Shirley Strombom with her hand to her face, possibly looking across the Morley Street gully to where a group of patients and staff are waving from the New Plymouth Hospital grounds.

The first photo: Nearest the right side of the station wagon is N.P.Councillor Guy Macallan.Partially hidden wearing a white dress is Janet Davie,N.P.’s first lady councillor. In front of her is councillor St Leger Reeves standing with his wife,Lucy Reeves. Bernard Freyberg is shaking hands with Macallan. Facing the camera behind the G.G.’s shoulder is Mr E.R.C.Gilmour,N.P.’s Mayor. Lady Freyberg, holding her hand bag, is standing on the bank. Three children on the top edge of the bank are: Ian Lobb,wearing sandals, Shirley Strombom in a white top, and Jim Barrett in a sleeveless jersey.

A few have been identified by some who were there and some others whose parents were there.E.&O.E. More information most welcome.

Photo shows Lord and Lady Freyberg being introduced to people by the Mayor, Mr Gilmour, on the top of Churchill Heights, New Plymouth. The Vice Regal visit was well reported the next day in the Taranaki Daily News,Tues.Dec. 9th.1947. The visit was notable for,among other things, the Investiture of Honours to over 60 Taranaki citizens, a first for any N.Z. Province.