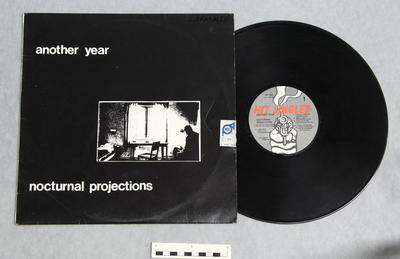 Production date
1982
Description
A 78rpm record titled " Another Year " . The record is held in a cardboard cover, with a paper sleeve inside it and accompanied by a cardboard lyric sheet. The record itself features a paper label with " HIT SINGLES " written in large red capitals along with a drawing of a smoking revolver. Side 2 features the same text with a man, who has apparently been shot. Both of these labels also feature track listings in grey text. Side 1 of the record features the tracks " YOU'LL NEVER KNOW " " ISN'T THAT STRANGE " " COULD IT BE INCREASED " . Side 2 features " DIFFICULT DAYS" and "OUT OF MY HANDS" .The black cover features a photograph of a spartan room and a seated figure. " another year / nocturnal projections " is written in white on the cover. The reverse features track listings and production details in white text and a scene of a manipulated photograph of a woman sitting amongst rows of empty seats. "ANOTHER YEAR NOCTURNAL PROJECTIONS HIT 001" is written on the spine of the cover. "L. FRANKLIN" is handwritten in black on the cover.
See full details

Credit line
Nocturnal Projections were a post-punk band from Stratford. Their sound has been described as "one of New Zealand's stand out responses to the bottomless pool of left-field sound coming out of the United Kingdom in the 1970s and 1980s". The band was made up of Peter and Graeme Jefferies (vocals, guitar), Brett Jones (bass) and Gordon Rutherford. Resident at New Plymouth's Lion Tavern from July 1981 to February 1982, the band then shifted to Auckland, self-releasing their first single in June 1982 and their EP Another Year later that month. Their busy live gig schedule included supporting John Cooper Clarke and New Order in December 1982.

The members of Nocturnal Projections became involved with the New Zealand indie scene at its earliest stages, in1981 (the same year Flying Nun was established). Nocturnal Projections in particular is noteworthy because it is an early and influential form of 1980s New Zealand styled indie music which goes in a different direction than the jangly, bright, direct pop music that Dunedin became famous for. Nocturnal Projection is driving post-punk, with percussion-driven songs revolving around repetitive yet deceptively musically sophisticated riffs. It is recognisably music of the New Zealand scene, especially in how it is recorded: a direct, intimate, unadorned sound, but with a mood and themes closer to the darkness of Joy Division and The Velvet Underground than the lighter music New Zealand later became famous for.

Nocturnal Projections split in 1983, with Peter and Graeme Jefferies forming their own band, This Kind of Punishment, with Peter then pursuing a solo career and teaching music in Taranaki, while Graeme went on to form well known indie project The Cakekitchen.