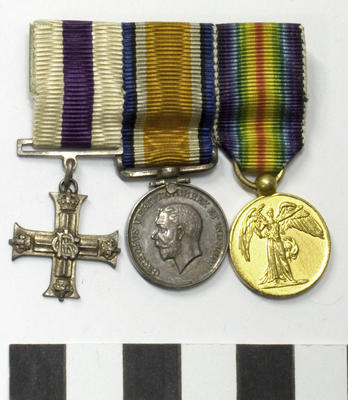 Description
A miniature British War medal. The obverse features an uncrowned left facing portrait of King George V. " GEORGIVS V BRITT: OMN: REX ET IND: IMP " is marked around the profile. The reverse features a St George figure on horseback which is trampling a shield representing the Central Powers and a skull and crossbones. A sun is in the background. " 1914 1918 " is marked around the edge of this scene. " R-15141 A - CPL. C. A. JORDAN. K. R. RIF. C." is inscribed on the edge. The ribbon has a watered orange centre with stripes of black and white at the sides and royal blue edges. It is mounted together with a miniature Military Medal and Victory Medal with a simple straight pin suspension on the reverse. "BALDWIN & SONS LTD / DUNCANNON STREET / CHARING CROSS LONDON " is marked on the reverse of the bar.
See full details