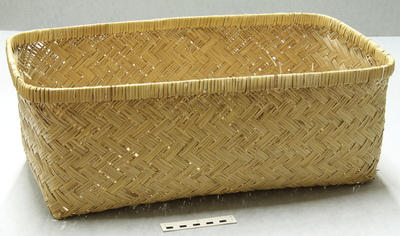 Description
A rectangular woven cane basket. The basket is relatively loosely woven but it has a rigid lip.
See full details

Credit line
This basket was used by Ian and Dorene Vickers to carry their children Alison, Susan, Guy and Jeff during the 1960s. Ian remembers that each child outgrew the basket when they were about six months old. "It was a very handy means of transporting a young child," he said. One of the best things was if they feel asleep in transit, as was often the case, they could be carried inside without waking them. Ian and Dorene inherited the basket from Dorene's family. They had also used it to carry their infant children in the Whanganui area during the 1930s.