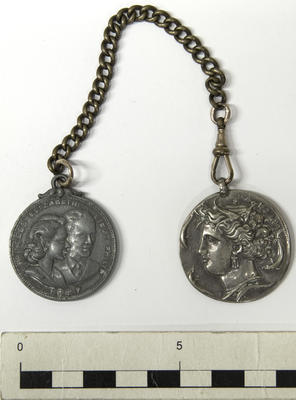 Description
A pewter-like metal medallion. The obverse features right facing profiles of Princess Elizabeth (later Queen Elizabeth II) and Lieut. Philip. " PRINCESS ELIZABETH / LIEUT PHILIP / 1947 " is marked around it. The reverse features a heart shape surrounded by flags, including the Union Jack and those of commonwealth countries. " TO COMMEMORATE / THE HAPPY UNION / OF / PRINCESS ELIZABETH / AND / LIEUT PHILIP " is marked within the heart". The medallion is chained to another one.
See full details

Credit line
This medallion was donated to Taranaki Museum as part of a large collection made by prominent south Taranaki lawyer John Houston.