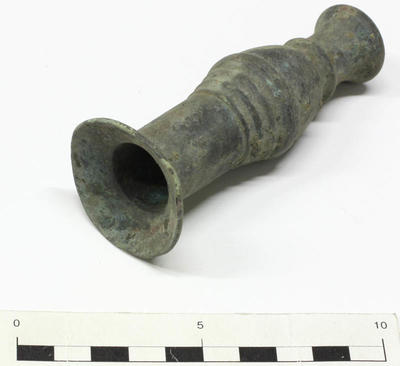 Description
The upper part of a brass candlestick with a fluted top.
See full details

Credit line
This candlestick fragment was discovered during an excavation of the site of the Street homestead in Bell Block, which was burned on 26 October 1860 during the First Taranaki War. It was found on the site of the Street's well, which contained a considerable amount of archaeological material which was thought to be associated with the clean up of the site after it was burnt. The Street homestead site was excavated in June 2005 by a Geometria team led by Dr Hans-Dieter Bader. It revealed a wealth of information and artefacts which according to the archaeological report published about the excavation " highlight the exploits, achievements and living conditions of the labouring class of British emigrant, an otherwise quiet cohort in the historical record." The site of the homestead is now part of Penrod Drive.