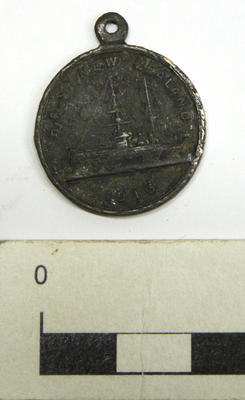 Description
A small bronze medallion featuring a battleship on the obverse. " H.M.S. NEW ZEALAND 1913 " is marked around it." TO CELEBRATE / THE VISIT / OF / NEW ZEALANDS / GIFT / BATTLESHIP / TO THE EMPIRE " is marked on the reverse.
See full details

Credit line
"In 1909 Prime Minister Sir Joseph Ward reacted to the perceived German threat by announcing that New Zealand would fund the construction of a battlecruiser to be gifted to the Royal Navy. Construction of HMS New Zealand cost £1.7 million ($252 million in 2010)." During the ship's 10 week tour of New Zealand in 1913, an estimated 500,000 people visited the battlecruiser. See 'HMS New Zealand begins tour of NZ',
http://www.nzhistory.net.nz/page/hms-new-zealand-begins-tour-nz  (Ministry for Culture and Heritage).