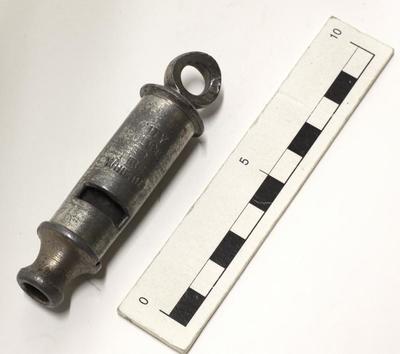 Description
A tubular metal whistle with a loop at one end. " CITY / POLICE / OR / FIRE / WHISTLE " is marked on one side.
See full details

Credit line
Did this police whistle play a part in the capture New Plymouth's notorious Highwayman?
According to family tradition, passed down through several generations, the whistle belonged to Harold Thomson, and was in his pocket when he tackled the armed robber during an attempted hold-up of New Plymouth’s Criterion Hotel on 20 July 1893.
The story goes that a small nick in the whistle, on the ridge near the mouthpiece, was caused when it deflected a shot fired by the flamboyantly costumed criminal during the scuffle, saving Harold from serious injury. Harold later gave the whistle to his favourite niece, Cecily Greatbatch, who cared for it before it passed down her family. While sceptics may question why a young man would carry a police whistle with him to the pub, his father was Inspector John Bell Thomson, the commander of the West Coast and Wanganui police district at the time. So perhaps he had already given it to his son as a keepsake, which he then put to good use. Improbable maybe, but regardless of the exact story, the whistle provides a tangible link to a colourful period of New Plymouth’s policing history.