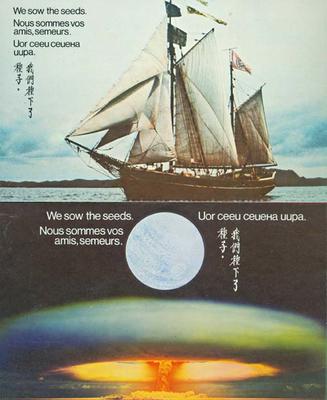 Production date
1974
Description
Fri is a yacht that spearheaded an international protest of a flotilla of yachts in a voyage against atmospheric nuclear tests at Moruroa in French Polynesia in 1973. Fri was an important part of a series of anti-nuclear protest campaigns out of New Zealand which lasted thirty years, from which New Zealand declared itself a nuclear-free zone which was enshrined in legislation in what became the New Zealand Nuclear Free Zone, Disarmament, and Arms Control Act 1987. In 1974, coordinated by Greenpeace New Zealand, the Fri embarked on a 3 year epic 40,233 kilometers “Pacific Peace Odyssey” voyage, carrying the peace message to all nuclear states around the world.
Perforated postcard depicting two images; the yacht Fri and a composite image of the earth from space, the rim of the earth atmosphere and a nuclear explosion with a peace message to the Chiefs of State for Great Britain, U.S.A., France, Russia, China on the reverse.
See full details

Background information sheets (2) about the Fri and her activities and history.