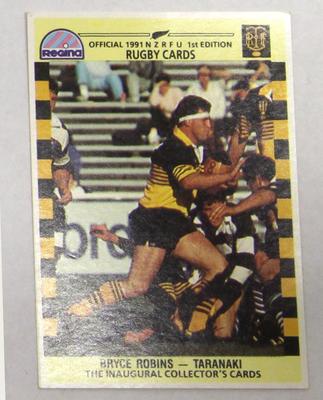 Production date
1991
Description
A Rugby Card featuring Bryce Robins of Taranaki. The card features a colour photograph of Robins running the ball in a game against Auckland. The card is a light yellow colour with a thin white border and two sides of the photograph are flanked by amber and black stripes. " OFFICIAL 1991 N Z R F U 1st Edition / RUGBY CARDS " is written at the top of the card along the the Regina brand and the emblem of the Taranaki Rugby Football Union. A silver fern design is pictured above the " N Z R F U ". " BRYCE ROBINS - TARANAKI / THE INAUGURAL COLLECTOR'S CARDS " is written below the photograph. The reverse of the card features an identical design at the top and again has amber and black stripes down two sides. " BRYCE ROBINS / ( Eltham) / Utility Back / Born: December 12, 1958 / Points in 1990: 4 (1 try) / An excellent All Black trial in 1985 saw / Robins, who first played for Taranaki / in 1980, selected for the tour to South / Africa. This tour was eventually aban-/doned. He went to Argentina instead, / later touring South Africa with the / Cavaliers. A strong, determined player / whose commitment is always / complete. / No. 142-217 / THE INAUGURAL COLLECTOR'S CARDS " is written on the reverse.
See full details

Credit line
This card was part of a large collection made by New Plymouth boy Andrew Moffat in 1991. Andrew was in Third Form at New Plymouth Boys' High School and playing prop in the school's D1 Black rugby team. He remembers lots of his mates were very keen on collecting these cards. They were purchased in packets, along with chewing gum which was seldom eaten, and they were quite cheap to buy. Andrew spent many hours sorting and organising the cards which he also used to swap with his mates. It even got to the point where they could quote biography details from the back of the cards of relatively obscure provincial players who they could never remember seeing play. While Andrew collected hundreds of cards, the manufacturer included a large number of duplicates and he never managed to collect the whole set. Unsurprisingly, the cards of the Taranaki players were his favourites.