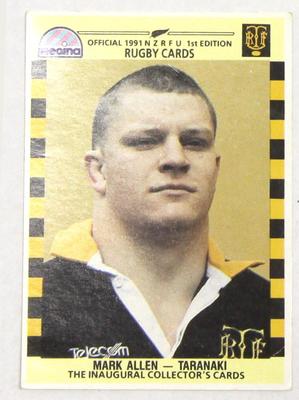 Production date
1991
Description
A Rugby Card featuring Mark Allen of Taranaki. The card features a colour photograph of Allen which appears to have been cropped from a team photograph. The card is a light yellow colour with a thin white border and two sides of the photograph are flanked by amber and black stripes. " OFFICIAL 1991 N Z R F U 1st Edition / RUGBY CARDS " is written at the top of the card along the the Regina brand and the emblem of the Taranaki Rugby Football Union. A silver fern design is pictured above the " N Z R F U ". " MARK ALLEN - TARANAKI / THE INAUGURAL COLLECTOR'S CARDS " is written below the photograph. The reverse of the card features an identical design at the top and again has amber and black stripes down two sides. " MARK ALLEN / ( Stratford) / Prop / Born: June 27, 1967 / No points in 1990 / Still young for a prop, the burly auto / electrician was in outstanding form in / the Taranaki front row. He was a nom- / inee for the New Zealand Promising / Player of the Year title, and was a first / choice prop on the New Zealand De-/velopment team's tour to Canada at / the end of 1990. / No. 146-217 / THE INAUGURAL COLLECTOR'S CARDS " is written on the reverse.
See full details

Credit line
This card was part of a large collection made by New Plymouth boy Andrew Moffat in 1991. Andrew was in Third Form at New Plymouth Boys' High School and playing prop in the school's D1 Black rugby team. He remembers lots of his mates were very keen on collecting these cards. They were purchased in packets, along with chewing gum which was seldom eaten, and they were quite cheap to buy. Andrew spent many hours sorting and organising the cards which he also used to swap with his mates. It even got to the point where they could quote biography details from the back of the cards of relatively obscure provincial players who they could never remember seeing play. While Andrew collected hundreds of cards, the manufacturer included a large number of duplicates and he never managed to collect the whole set. Unsurprisingly, the cards of the Taranaki players were his favourites and he remembers joining in the "BULL!!" crowd chants at New Plymouth's Rugby Park when Mark Allen made one of his charateristic runs. Respected rugby writer Lindsay Knight, who penned a profile of Allen for the New Zealand Rugby Museum, said he had an extraordinary career during the mid to late 1990s when he became one of New Zealand's most recognisable players with a folk hero status which spread well beyond Taranaki. His shaven head and barnstorming style with the ball in hand made him a crowd favourite and for a while, Rugby Park in New Plymouth was known as "the Bull Ring", in honour of his nickname. Knight also notes that off the field Allen was highly marketable with his pleasant, cheerful manner and readiness to chat with the media. Yet Allen as a loosehead prop had only a modest international career and was always an understudy in any All Black selection. After his rugby career was ended by injury in 1998 he went on to do some rugby related television work and became active in the Destiny Church movement in the mid 2000s.