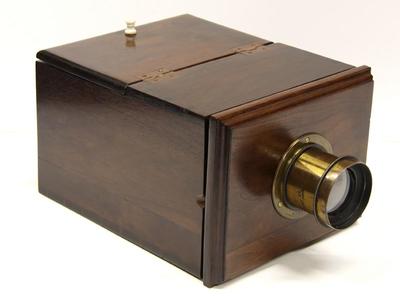 Credit line
In October 1833, William Henry Fox Talbot – who later invented the negative/positive photographic process – was using a camera obscura in Italy to assist with his drawing. He recalled the moment some years later, saying: “And this led me to reflect on the inimitable beauty of the pictures of the nature’s painting which the glass lens of the Camera throws upon the paper in its focus – fairy pictures, creations of a moment, and destined as rapidly to fade away. It was during these thoughts that the idea occurred to me … how charming it would be if it were possible to cause these natural images to imprint themselves durably and remain fixed upon the paper!”
Though not the first to think of this idea, Talbot was the first to solve the technical problems that prevented it coming to fruition. In 1834, he discovered that paper soaked with a combination of common salt and silver nitrate became light sensitive enough to capture an image. These contact prints, or ‘photogenic drawings’ as Talbot called them, were crucial to the development of photography. This camera obscura is a replica of the portable versions used by artists to trace scenes accurately. The mirror inside the camera – used to turn the image the right side up – is front surfaced, achieved using deposited silver as would have been done in the 1800s. The lens is an original 19th Century brass bound lens with a focal length of approximately 300mm. A camera obscura is an optical device that contributed significantly to the invention of photography. It operates on the principle that light from an illuminated object passes through a hole into a darkened enclosure and strikes a surface, resulting in an upside down but otherwise exact image of the object. This principle was discovered as early as the 5th Century B.C. by Chinese scholar Mo Ti.