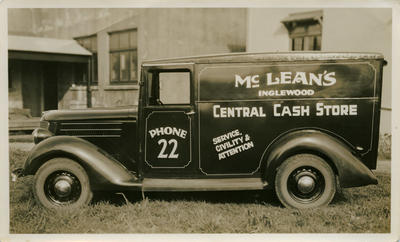 Production date
1936
Description
James McLean's 1936 model Ford V8, used as the grocery van for McLean's Central Cash Store in Inglewood. The motor and chassis were imported as a unit and then the body work was built by Mr J. Wilson, whose workshop was in Cutfield Street, Inglewood. The van was painted bright red and the wheels were made of solid rubber. The van is parked at the back of the shop, which was on a section that is now 90 Rata Street, Inglewood. The nose of the van is pointing towards the storeroom and back door of the grocery store. Photograph taken by Sidney G. S. Lovell, son-in-law of James McLean, who became manager of the business after McLean died in October 1935.
See full details

Just to let Sarah know I will look out old photographs of the shop which used to be on the corner of brown and rata sts. granddad and granny emigrated from Glasgow around 1909 and moved to Inglewood around 1910/1911 My mother (Mary) owned house and then sold it to Stephanie's fathe Allan Lovell.

Hi. I am jsmes mclesns grest granddaughter. Happy for Sarah to get in touch. My father owned the house from the 80's until it was shifted to upland road.

The Macleans owned my current home when it was on Rata Street for many years, probably 1910 to the eighties. It The home itself is now on Upland Road, but I would love to hear from anyone who might be able to share some more history of the house or its occupants. Also, would like to hear from Fiona Locking if you are able/willing.

James McLean was my grandfather, this photograph was taken at the rear of granddad's shop,which my grandmother later sol the property to Maypole Stores.