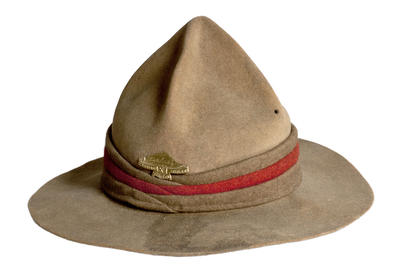 Credit line
This Lemon Squeezer hat was worn by Lieutenant Edmond Malone, who served with distinction during World War I before dying of injuries sustained in France during 1918.
Edmond was the eldest son of Lieutenant Colonel William Malone, the Stratford man who earned a prominent place in New Zealand's military history after leading a doomed defence of Chunuk Bair in Gallipoli on August 8 1915. It was William Malone who is also widely credited with inventing the design of the Lemon Squeezer hat.
Edmond Malone was working in the Dover Road area of the Okato district when World War I began on August 4 1914.
Within days, together with his brother Terry and his father, Edmond had enlisted for overseas service. After a training period in Egypt they all served in Gallipoli. Terry was wounded on June 1 1915 and Edmond was wounded on July 27. While Terry’s wound was so severe he was shipped home Edmond recovered and was given a commission as a Second Lieutenant in the 1st Battalion of the Wellington Regiment in March 1916. Between April and early June he served with the regiment in France before being put out of action again and spending a few months in an English hospital. While recuperating he met and fell in love with a nurse Mary Brocklehurst. They were married on 4 July 1917 at Watford before Edmond, who had been promoted to Lieutenant, returned to the front.
In October his right shoulder was badly shot up and he returned to England briefly to recuperate before returning to battle.
In November Edmond was awarded the Military Cross for “setting a splendid example of courage and energy to his men” while leading a platoon through heavy shell and machine gun fire during operations at Passchendaele.
During heavy fighting in March 1918, part of a German Spring offensive, he was again wounded seriously, this time in the left leg. He died on 6 April. At the time of her husbands’ death Mary Malone was pregnant with their daughter Elinor. In 1945, one of the Malone family visited Mary, who had never remarried. At her house she showed him this Lemon Squeezer hat, and Edmond’s Military Cross, which she had kept by her bed since her husband’s death.
Edmond was buried in the military section of the Wimereux Communal Cemetery, on the outskirts of Boulogne, and his sacrifice was also recorded on the Okato War Memorial, along with other men of the district.
Another plaque on the memorial, commemorating Edmond’s Military Cross, was unveiled on 11 November 1999 during a Remembrance Day Service.
This hat was gifted to Puke Ariki by Laurence Roebuck, and in consultation with Edmond Malone’s granddaughter, Jen Deighton-Drewry. While researching their family history Mr Roebuck discovered his father Bryan, was the illegitimate child of Edmond Malone, who had been briefly engaged to Bryan’s grandmother.