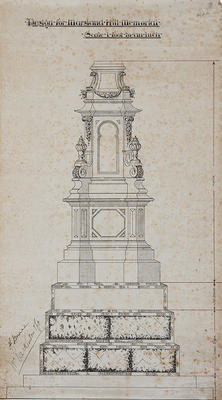 Production date
1908
Description
As a result of the decision to erect a memorial to Imperial and Colonial forces who fought and died in during the Maori Wars, the Marsland Hill Memorial Committee was formed in 1906. The task set before the committee was to decide on the type, site and costing of the memorial and to set in motion a fund raising scheme to finance the plans. The monument, a statue of a man in the uniform of the Armed Constabulary, was unveiled on the 7 May 1909.
Drawing for the Marsland Hill memorial. Features the front elevation and base. Signed by F Mace and Mr Sanderson. Undated. 610mm H x 340mm W
See full details