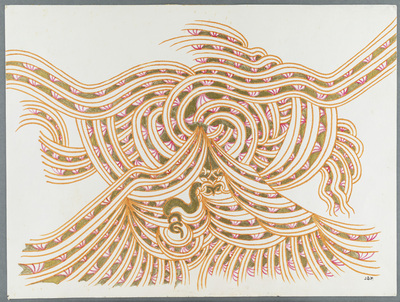 Read more about this collection

John Bevan Ford (1930-2005) (Ngāti Raukawa) was known for his colourful and intricate ink drawings based on Te Ao Māori. Exploring personal and Māori worldviews through the patterns found in raranga (weaving), kōwhaiwhai (rafter paintings), korowai (cloaks) and whakairo (carving), he established himself as a leading contemporary Māori artist.

This significant collection of work by Ford was mostly gifted to Puke Ariki by the artist in the 1990s. Ford lived in New Plymouth from the mid-1950s till 1967 and was part of an art collective called Group 60 that also included Taranaki artists Michael Smither and Don Driver.

Your query returned no results for person records.